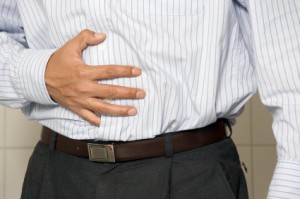 Endoscopic retrograde cholangiopancreatography, also known as ERCP, is a diagnostic procedure that detects problems in the liver, gallbladder, pancreas and bile ducts, the tube-like structures that carry bile throughout the body and aid in the digestion of food.

ERCP combines the use of an endoscope with X-ray imaging tests to obtain a detailed view of these organs. ERCP can also be useful in treating certain problems found during the test, such as for the removal of abnormal growths.

ERCP is primarily performed to detect and treat various abnormalities and conditions affecting the liver, pancreas and bile ducts. This includes various diseases, certain types of cancer, gallstones, cysts and tumors. ERCP may be recommended for patients who are experiencing the following symptoms: 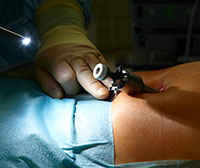 Prior to undergoing an ERCP, patients will be given a list of written instructions to follow. Patients are restricted from eating and drinking for at least four hours before the test will begin, since the stomach must be empty during the procedure in order for the doctor to have a clear view of the entire targeted area.

Some medications can be continued to be taken prior to the ERCP, although dosages will likely need to be adjusted. Any necessary changes to the dosages of certain medications, especially blood thinners, will be determined by the doctor, who must also be made aware of the presence of any allergies or pre-existing health conditions. In an emergency, ERCP may be performed safely on a woman who is pregnant, although it is usually advisable for the procedure to be put on hold until after childbirth. Patients must also be accompanied by a friend or family member to their appointment, since driving is prohibited for approximately 24 hours after the ERCP.

The ERCP procedure begins with the placement of an intravenous, or IV, line in the patient's arm, through which medication is administered to sedate the patient.

The patient will be positioned to lie on either the stomach or the left side during the exam. A flexible, lighted endoscope is then inserted into the mouth, passing through the esophagus and stomach. It is guided along until it 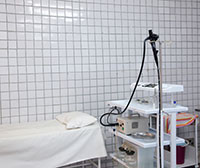 reaches the duodenum, which is the small portion of the intestine located closest to the stomach. A thin tube is then passed through the endoscope and inserted into the tubes, or ducts, which lead directly to the pancreas and gallbladder. A special dye is injected into those ducts, and X-rays will be taken. The X-ray images provide the doctor with the ability to visualize any cysts, tumors or gallstones present, as well as any other evidence of disease or abnormalities.

In addition to diagnosing these conditions, ERCP can also be used to obtain a tissue sample for biopsy and perform minor surgeries with instruments inserted through the endoscope. When used for biopsy or surgery, ERCP involves the removal of abnormal growths, crushing of gallstones, opening the entry of the bile ducts into the bowel, drainage of blocked areas and diagnosis of tumors within the pancreas, bile ducts or gallbladder. The ERCP procedure may take anywhere from 30 minutes to 2 hours to complete.

While ERCP is generally considered a safe procedure, it is not without possible risk of complications. The complications that may be associated with the procedure include:

For further Information on ERCP, please refer to Asge.org »